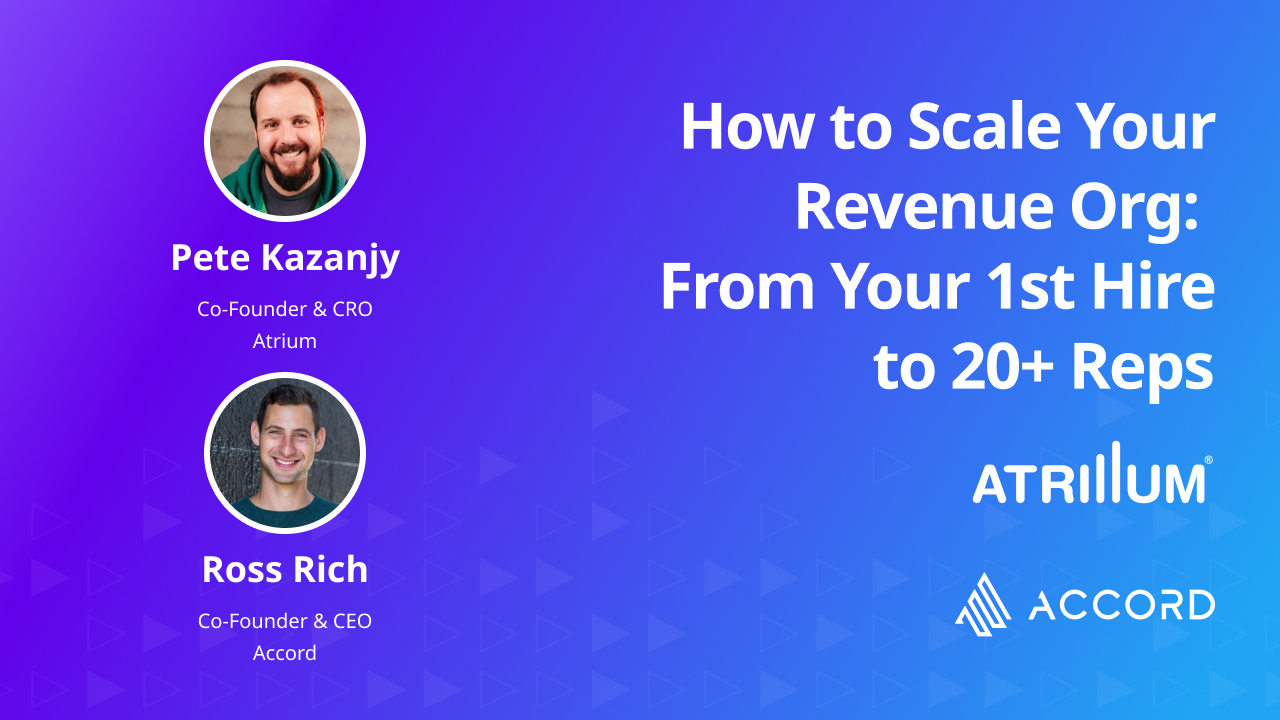 One of the most common questions we hear from sales leaders and founders: How do I scale my revenue team from our first 1-2 reps to a full organization of SDRs, AEs, CSMs, and managers? 🤔

There’s a lot to cover under that question: when is the right time to scale? How do you prove success at each stage? What are common pitfalls to avoid?

We recently dove into this topic with Pete Kazanjy, Co-Founder & CRO at Atrium!

Watch the full webinar recording below, get answers to key questions during the session, and check out links to more resources for scaling a successful revenue team.

Q: In B2B SaaS, when is the right time to move on from being the only seller (as a founder) and hire your first sales leader? 👯

A: When you’re starting to feel comfortable with your initial sales process and conversations with prospects.

That’s not to say you need to have everything figured out before you hire your first sales leader – far from it!

Once you get into a rhythm where you’re talking to similar types of prospects, having similar conversations, and starting to be a little more consistent, then it’s probably the right time to bring on another sales leader to help you sell.

However, once you hire that first sales leader, don’t move away from sales too fast. You should be co-selling and figuring out your messaging and process together for a while.

Q: How do you think about the responsibilities of sales and CS – who should be responsible for expansion revenue? 🌱

A: It depends on your sales motion, but in Atrium’s land & expand model, CSMs are focused on making customers successful while AEs are responsible for expansion.

Before Atrium moved to a land & expand sales motion (about 18 months ago), their CS team was responsible for expansion. Now, the core metric CSMs pay attention to is product usage.

The CSM role is like a personal trainer: helping to make the customer successful in what they want to do with the product. Expansion of each account is the AEs’ responsibility. After the CSM ensures the initial group of customers in the account is successful, then the AE will sell into different teams at the organization.

The CSMs aren’t splitting their attention between customer success and expansion: all their focus is on success. Since making the change, the Atrium team has seen a huge increase in expansion revenue.

To learn more about land & expand sales motions, check out our conversation with Mark Roberge!

Q: What should the timeframe for ramping SDRs and AEs look like? ⏰

A: The rule of thumb for AE ramp time is about two deal cycles. SDRs ramp faster.

The deal cycle at Atrium is about 50 days. When ramping a new AE, they typically go through about a month of training before starting to take calls on their own. Roughly two deal cycles after that is when Pete starts to see his AEs approaching full productivity.

For SDRs, you’ll usually have a couple weeks of training, but the time between them starting to engage accounts and those accounts turning into opportunities is more compressed – maybe 2-3 weeks after they start hitting the phones.

Q: How do you decide when an SDR can be moved into an AE role? 🙋

A: Set clear goals for your SDRs to hit on their way to becoming an AE.

The specifics will depend on your company, but define a series of stages for your SDRs to pass through and goals to hit before moving to an AE role: X amount of opportunities created, X opportunities that closed, etc.

As they start to hit goals, give them micro-promotions and learning opportunities such as riding along on AE calls. Setting clear goals and expectations for your SDRs to hit will ensure that you as a manager can also focus on giving them specific feedback to help them hit those goals.

Q: What’s something you wish you knew before you built the teams at Atrium and Accord? 🔮

Ross: “I wish we hired an experienced CSM at the same time as we hired our first sales rep because there are so many things to learn about making customers successful, similar to perfecting your pitch.”

Pete: “The biggest mistake I made was trying to jump two stages at once. Before I had a handful of AEs selling repeatedly alongside me, we brought in sales management. It was probably too early for that.”

Slide deck from the webinar – there are several other resources linked in here!

Introducing new features to make collaborating with your buyers and sharing your Accords easier: approved domains and more! 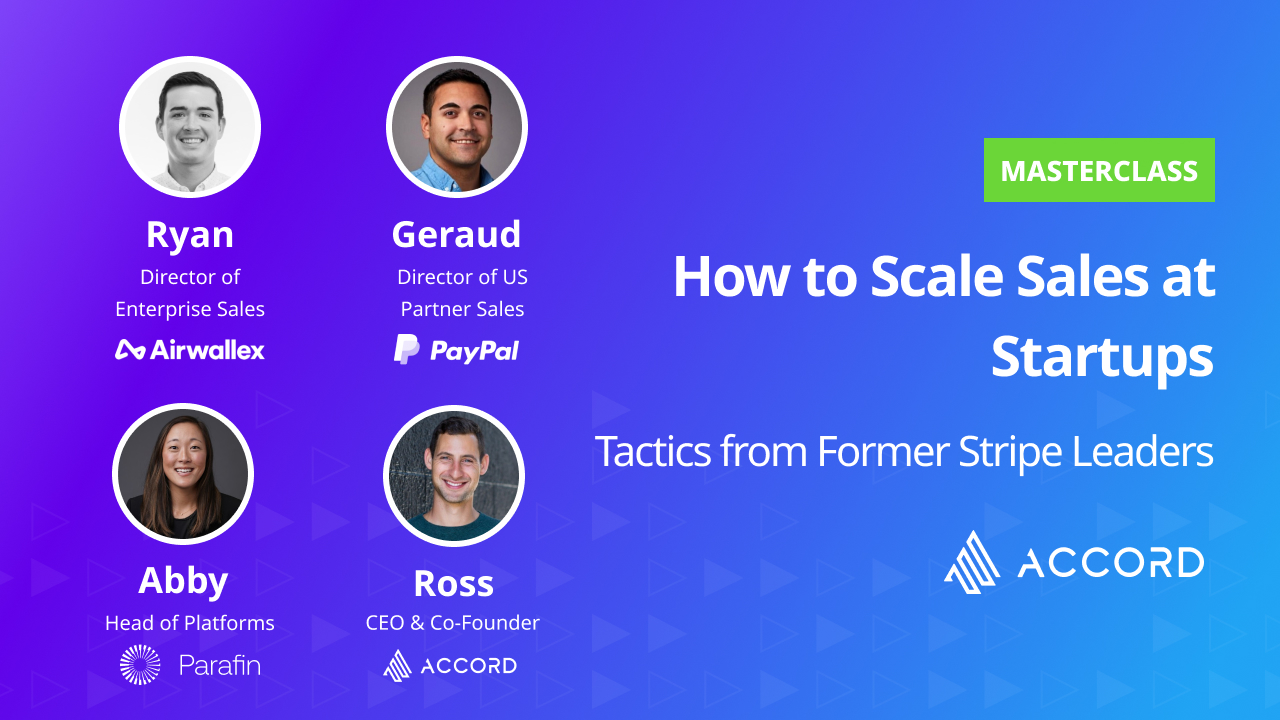 How to Scale Sales at Startups: 4 Tactics from Former Stripe Leaders

There are a lot of challenges that come with moving from your first sales hire, to your first 3-5 reps, to 10-20+ reps and beyond. I talked to three former Stripe leaders about their experience building sales at Stripe from a handful of reps to a global org of hundreds, and their advice for other scaling startup teams. 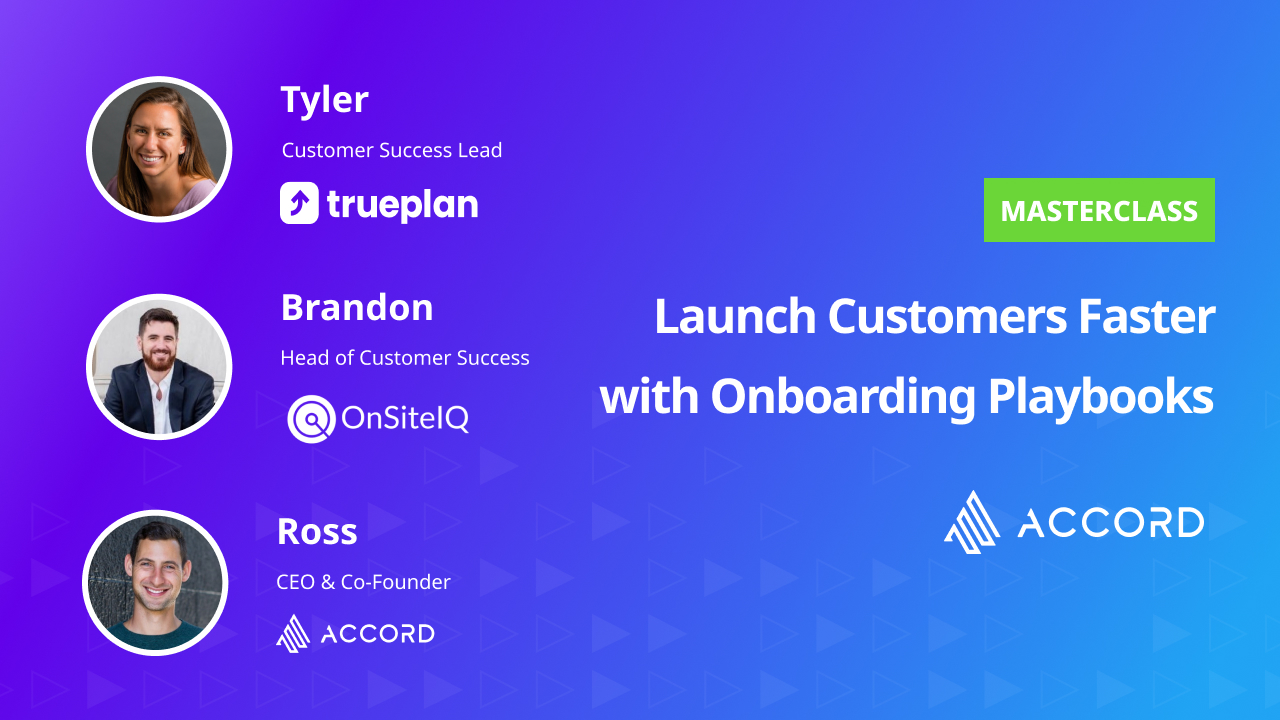 If you don’t get customers to value quickly on your product, you’ll struggle to retain them – not to mention lose out on expansion opportunities and referrals. Watch our masterclass with top CS leaders on Launching Customers Faster with Onboarding Playbooks, and get the key takeaways.