Why Sales Playbooks Are Key to a Winning GTM Strategy 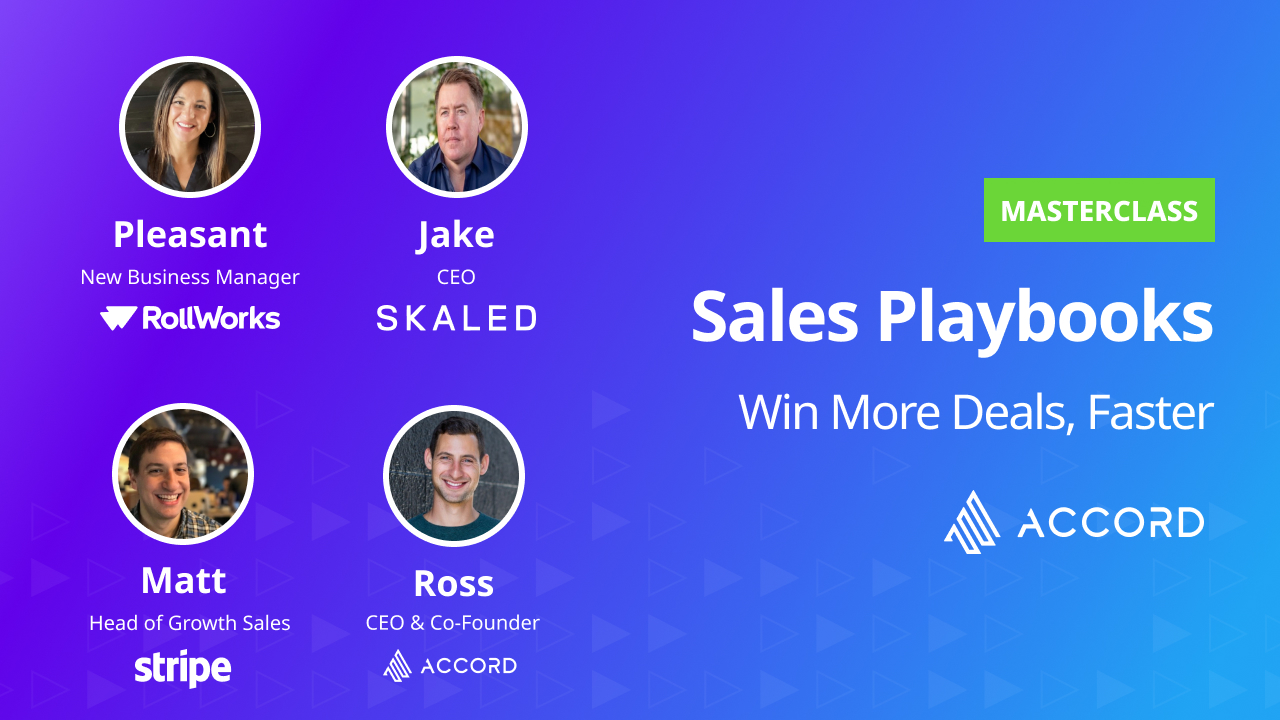 With a playbook, managers can get new reps up to speed on their sales process quickly. They can ensure everyone follows the same proven process for each deal, and since the process is documented, it’s easy to iterate and make improvements over time.

Watch the full masterclass recording and get the key takeaways below!

Q: Why are sales playbooks required to have a winning GTM strategy?

A: Playbooks enable you to learn what’s working and what isn’t in your sales process so you can iterate and improve faster, ramp new reps and scale quickly, and ensure everyone on your team is aligned around a consistent message and approach.

“For startups, we’re in high stakes territory,” Pleasant said. “If you don’t document what’s worked and what hasn’t, it’s hard to build off that.”

Early in his career, Jake said he was against using playbooks until his boss asked, “Do you think we train a thousand people on a process that doesn’t work?” Jake closed $60,000 in new business the next month after starting to follow the playbook.

“What I actually found was that the playbook was freeing,” Jake said. “I could be more present and listen more attentively to prospects.”

Playbooks help your internal team understand expectations and benchmarks, and align them around a consistent message and approach – which also benefits the customer.

And just because you use a playbook doesn’t mean your team doesn’t have flexibility. There’s a difference between process (the way you move prospects through the journey and check off boxes) and plays (ways you can pivot and get creative based on how the conversation is going). But having a playbook ensures you can track what you’re doing, instead of using ad-hoc or inconsistent processes, so you can improve faster.

Q: How do I document my playbook when it’s always changing?

A: Start simply: write down the questions you’re asking prospects, when you’re asking them, how you’re positioning your product. When you’re growing quickly, your process will change quickly, but it’s still important to document what you’re doing so you can test, iterate, and improve.

“It’s never too early to document, because you can’t scientifically test things if you don’t have a baseline,” Jake said.

If you’re a very early stage startup or a founder doing sales, there will be a lot of guessing at the beginning, but by documenting what works and what doesn’t, you’ll have a foundation to build on. Your playbook shouldn’t be static – it’s always living and breathing.

“When you have a solid playbook, you get amazing insights that enable you to develop the next version of it,” Matt said. “It’s hard to evolve if you don’t have a baseline to start with.”

Pleasant recommends keeping your playbooks in one place that’s easy for everyone to access – whether it’s just a Google Doc or Sheet to get you started, or a dedicated workspace for building collaborative playbooks like Accord.

Q: How do you drive adoption of your playbook and measure its success?

A: Hire sales leaders who understand successful sales strategies and can coach others. Set benchmarks for your reps to see how effectively they’re ramping. Use data and feedback from your customers and reps to decide how to improve.

Driving adoption starts with hiring, Jake said. When you hire your sales leaders, ensure that they understand what goes into a successful sales strategy and process. If they know how to get from point A to point B, they can coach other reps how to do it. And after hiring a new rep, set benchmarks for them to judge how effectively they’re following the playbook, presenting the pitch, and ramping up.

Make sure you’re getting feedback from the people closest to the playbook, too – not just your customers. Your reps have valuable insight since they’ll be using the playbook every day.

“When you’re making changes to your playbook, make sure it’s based off feedback and data,” Pleasant said. “Sometimes reps can tell you things you don’t see in data and give you direction on where the playbook needs to improve.”

Matt said to also keep an eye on things reps might be doing that aren’t in the playbook but are getting better results, and adopt them. Having call listening sessions with your team where everyone shares feedback can be really helpful for figuring out where the playbook should be adjusted.

Q: What do sales leaders get wrong when it comes to playbooks?

Matt: There are two key mistakes: being too rigid and not allowing for change, and assuming that a playbook you used successfully before will work again.

“You need to adjust the strategy for each company, and customize your playbooks for each buyer persona,” Matt said.

Pleasant: The biggest mistake is not making your playbook one of the fundamental pieces of your organization.

“So many times people will build out a playbook and it’s shown during onboarding or ad-hoc trainings, and never mentioned again,” Pleasant said. “If you really want a playbook to be implemented well, make sure it’s continuously discussed and used for training.”

Jake: Focusing too much on the process and not enough on understanding your customer.

“The number one thing is there’s not enough training on buyer personas,” Jake said. “We’re over-focused on things like MEDDIC and these other processes, we’ve forgotten that it’s all about how to have a quality conversation with the customer.”

How to Introduce Mutual Action Plans to Your Buyers

The thing that sellers have the most questions about when using Mutual Action Plans: how to introduce them to buyers. This article goes over how to successfully introduce your MAP, align on expectations, and kick off a collaborative selling experience – including talk tracks you can use in your own process.

Mutual Action Plans are critical for aligning with customers and keeping long, complex deals or implementations on track. Here are seven basic best practices to follow that will take your MAPs from 9/10 to 10/10. 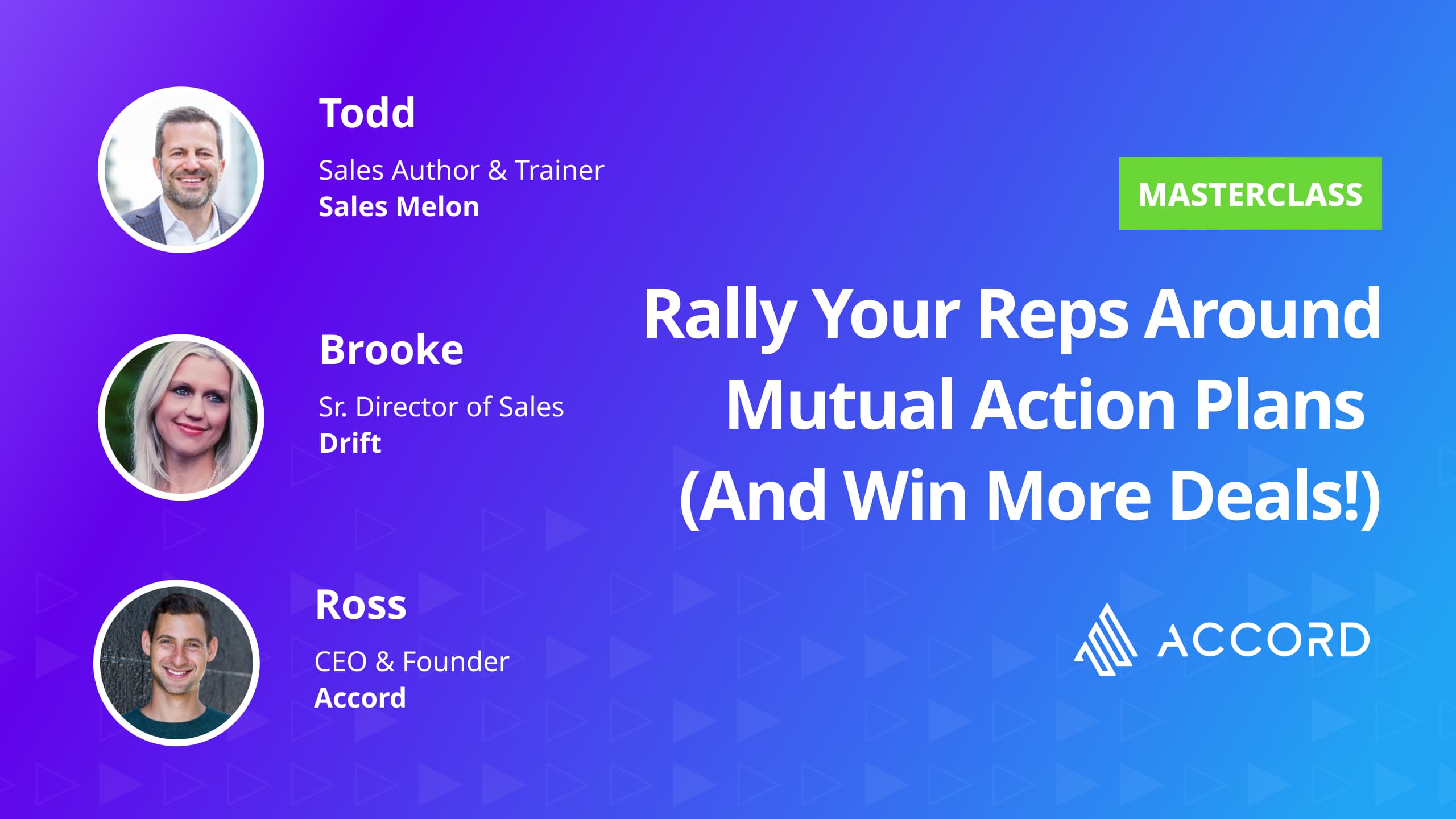 How to Rally Your Reps Around Mutual Action Plans

Mutual Action Plans (MAPs) should be a no-brainer for your sales team, especially if your sales are complex and involve multiple stakeholders. The question is: how do you get your reps to adopt and execute on MAPs consistently? We talked to top sales leaders & trainers Todd Caponi and Brooke Freedman to learn how (and why) to rally reps around Mutual Action Plans.